Pocket can be sponsored for $1,950.00 per year.  This includes joint supplements and injections, feed, vet, and farrier care. 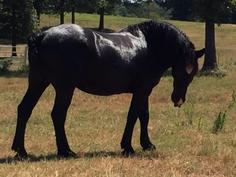 ​His previous owner was having some health problems and could no longer care for him.  He was probably a Paso Fino cross, but he was lovingly called, "Poncho the Man Pony" by several of the volunteers.  He had a very smooth "gait," and his smaller size was sometimes less intimidating to new  riders. Poncho passed away on April 15, 2014 at the age of 26 years old. ​ 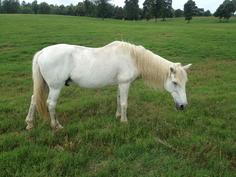 Ace was purchased for HATS to accommodate our "growing" rider population.  Ace is a Percheron draft horse foaled in 2002 weighing nearly 1900 pounds!   Unlike many other programs for differently-abled persons, our participants don't necessarilyage out of our services.  We can continue to work with our students until they either become too large for volunteers and horses to handle safely, or until some medical issue makes riding a contraindication.  Ace has had an interesting life.  He started out as an Army Caisson horse (look him up on Google as "Herb the Caisson Horse"), he went to work for the Wounded Warriors veterans program at Fort Sam Houston, and most recently had been a mounted patrol horse. You may have seen him at ULM football games. Ace is not missing those long patrol shifts, and has settled in quite nicely here at the barn. Ace is sponsored by THE LAW FIRM OF AMY COATH-JOHNSON for $800 per year.

Radler was foaled in 1978, although we do not know the exact date.  One of the toughest decisions I've ever made, he was euthanized at the age of 36 years old after he lost a significant amount of weight and had difficulty eating.  That's about 108 in human years.   He was a flea-bitten grey, “grade,” gelding.   I think he was part kindness, part forgiveness, part generosity, and all heart.   He worked as a therapeutic riding horse for about 11 years, but was retired in spring of 2014. This is truly amazing given that the typical therapy horse experiences “burn out” within 2 years, and the average lifespan of a large horse is about 25 years. 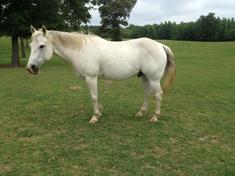 Pocket is a sorrel American Quarter Horse owned by Erika Anderson.  Erika volunteered with HATS until she graduated from LA Tech.  Pocket was her show horse for several years, but had a stifle injury and stomach ulcers that were giving him trouble in the show ring.  After his debut as a show horse for HATS in 2012, she decided to officially retire Pocket from his show career with us in 2013.  He is a fabulously well rounded addition to the program, as he enjoys everyone from beginner to advanced.  He is well versed in Western Pleasure, Showmanship, and Hunter Under Saddle.  His stifle issue is well maintained with light work, climbing up and down the hills in the pasture, and joint supplement; his ulcers are long gone!

Meet Sonny, our newest program horse!  He was donated to us in the spring of 2018 by his family, The Sauciers.  Sonny has had an incredibly diverse career including hunter jumper show and lesson horse, mounted archery, jousting, and carrying the King, Queen, and other members of the Court at Renaissance Festivals!  He has an easy-going nature and nice, slow, smooth gait, but with plenty of "get up and go" when you ask persistently! This makes him a versatile horse for a variety of our participants.  Sonny has injured his stifle in the past and requires joint supplements, occasional injections, and regular exercise to keep him moving well.  Sonny is sponsored by PROVIDENCE REAL ESTATE for $1,600 per year.  This includes feed, joint supplements and injections, vet, and farrier care.

Jake is a flea-bitten grey quarter horse foaled in 2002.  He was purchased from Covenant Farms in 2013 by HATS because he has a pretty laid back temperament and a short but wide build that is perfect for therapeutic riding, not so much for jumping!  Jake is fantastic with younger riders and beginners, because he just doesn’t get in much of a hurry.  He also works well with riders who have increased tone because he is slow, steady, smooth, and actively tries to balance the rider on his back.

​Jake is sponsored by AMELIA SIMON for $800.00 per year.  This includes feed, vet, and farrier care.

King Fish was foaled in 1988.  He was a quarter horse gelding donated by Chris and Summer Fulton, founders of the Shelby’s Wish foundation.  Fish was given to their daughter, Shelby, who was terminally ill.  Sadly, Shelby passed away when she was 8 years old.  Chris and Summer wanted Fish to go to a home where other children could enjoy him, so they offered him to our program in 2009.  He enjoyed his job as a therapeutic riding horse while patiently teaching riders of all skill levels and disciplines.   He had been a western performance horse and trail riding horse before his home at HATS.  He was an odd color; we considered him to be a palomino instead of a dun because he has no dorsal stripe (a line down his back). 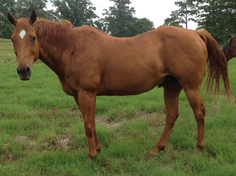 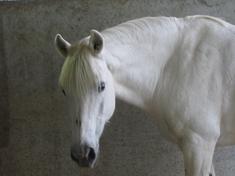 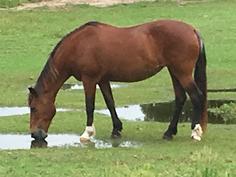 Mr. T was a grey Arabian / Saddlebred cross foaled in 1992, and was humanely euthanized after tumors began to become symptomatic, causing a wide range of health problems.  He was owned by HATS instructor, Dr. Sally Thigpen, and her daughter, Sarah Freeman.  He was registered with the Half Arabian Registry as Wa Bout Time, but Sally and Sarah called him Mr. T.  He was foaled in New Mexico, and started out life as a hunter/jumper and dressage show horse, there.  Mr. T appeared in Haughton at Double Rainbow, but was later sold to the Hope Ranch residential facility in Minden where he became a therapy horse.  After Hope Ranch closed, Mr. T was purchased by Sally and became a lesson horse at Covenant Farms.  Finally, Sally decided to bring him here for our riders to enjoy!  He was a member of the HATS family for 6 years.  Mr. T had scoliosis (curvature of the spine) and many melanomas and other types of cancer that metastasized to his ear, brain, and other areas.  He taught many of our students to ride independently, and he worked diligently to teach me the virtue of patience.

Kylee was foaled in 1995 and was captured on BLM lands in Nevada when she was about a year and a half old.  She is a bay, meaning that she has a reddish brown body color with black points on her ears, muzzle, and lower legs with a black mane and tail.  She has a white freeze brand on the left side of her neck with a series of lines and symbols that tell us the year of her birth and her government ID number.  She was purchased from a man who did not have time to enjoy her anymore.  She is a terrific size for therapeutic riding because she is not too tall, but strong enough to carry heavier riders.  Because she is a Mustang, Kylee is a very “easy keeper.”  She has to be kept off the grass at least part of the time during the spring and summer to keep her from over-eating (she is prone to founder, a condition that can cause pain and physiological changes in her feet).  Kylee is sponsored for $975.00 per year by FOUR SEASONS LANDSCAPE MANAGEMENT/ The Hendry Family.  This includes anhydrosis supplements, feed, vet, and farrier care. 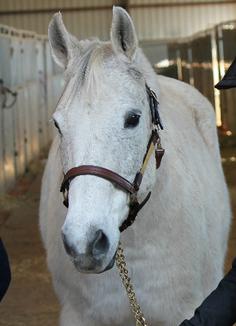 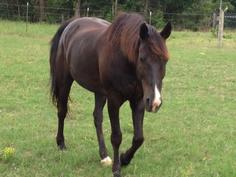 Fish had a malformation of his larynx that caused him to be noisy, especially if he is excited or working hard. Fish had a bouncy gait that supplied a multitude of sensory stimulation to the rider!  Fish worked hard in his career as a therapy horse, and was retired in the spring of 2016.  He was humanely euthanized in the fall of 2016 after his breathing became too labored for medications to help. 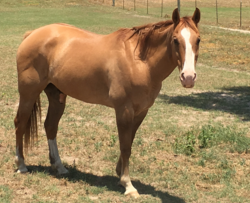 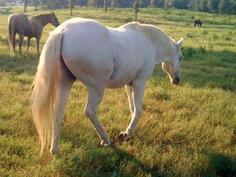 Although our barn is currently full, HATS may consider an exceptional, semi-retired show horse, English or Western discipline, that still has a lot to offer, but may not be able to perform at his/her previous level, under 20 years old, without any significant unsoundness. The ideal horse is between 14 and 15 1/2 hands tall, sound in all gaits, and has exemplary manners on the ground and under saddle.

If you feel you have a horse that would be perfect for our program, please contact Leslie at hatsofnla@yahoo.com

Kohl is a black (sun fades to brownish black) American Paint Horse foaled in 1998. He was donated in 2014 by Diana Lewis after her arthritis began to prevent her from riding.  We are so thankful that Mollie at Crooked Creek Farm recommended us to Diana.  Kohl has had a show career in western pleasure, jumping, and dressage. His jumping career ended when he began to develop a mild ring bone on his left front, nothing major, but jumping would’ve made it worse.  He is highly educated, is a joy to ride, and has a great personality!  We are so happy to have him here!

Kohl is sponsored by Diana Lewis for $1,175.00 per year.  This includes joint supplements, feed, vet, and farrier care. 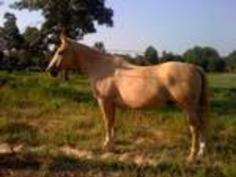 Blues retired to his home in Shongaloo with his owner, Lesley Thomas, after be became uncomfortable carrying riders due to an increasing angulation in his ankle and foot.   He was a tremendous asset to the program, and a favorite of many riders!  Sadly, he passed away at home in 2014. 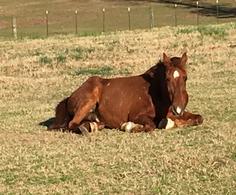 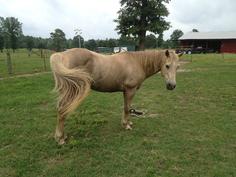 Randy is a Tennessee Walking horse foaled in 1994.  He was donated by Jimmy, John, and Nancy Wallace.  He has been a member of their horse family for many years, and belonged to John's brother.  Randy has primarily been a trail riding horse, but seems to really enjoy his therapeutic riding job.  What we love most about Randy is that he provides a core workout with a very different type of movement, and he is narrow enough to accommodate riders with tight adductor muscles while challenging their balance.